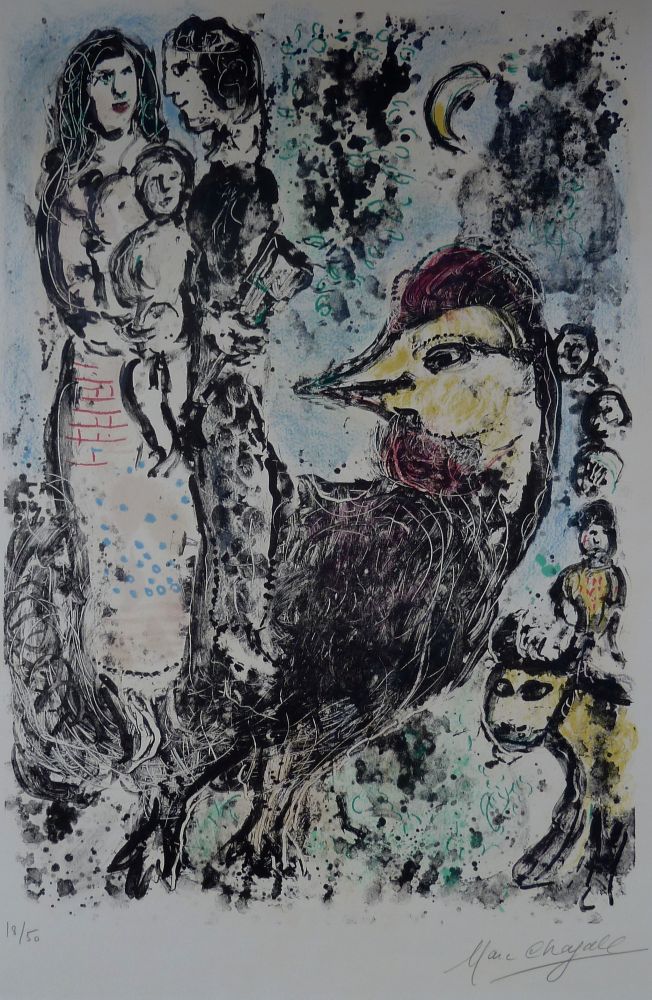 The Rooster and the Family

The Rooster and the Family

Marc Chagall was a Russian-Belarusian-French painter born in Belarus, at that time part of the Russian Empire. He is associated with the modern movements after impressionism. His Jewish origins and rural upbringing in Russia had a lasting effect on Chagall's life. His poetic mastery of dreams, memories and folklore dominated his work and commitment to original printmaking throughout his life.

Chagall was 63 years old when he first came to Mourlot in 1950 to study the technique of colour lithography with Charles Sorlier.Already a famous artist with nothing to prove, Chagall nevertheless worked tirelessly to master the nuances and subtleties of this demanding medium for his own satisfaction. Marc Chagall fabricated a mystical world of lovers, musicians and artists in his work. He chose lithography as a print medium that could offer him almost unlimited painterly freedom to explore his world.

"Something would have been lacking in my life if, in addition to my passion for colour, I had not been involved with engraving or lithography...Each time I held a lithographic stone or copperplate in my hand I thought I was touching a talisman. It seemed to me that I could put all my joys and sorrows in it.....Everything that touched my life through the years, births, deaths, weddings, flowers, animals, birds, the poor workers, my parents, lovers in the night, the biblical prophets, on the street, at home, in the temple and in heaven. And as I grew older, the tragedy of life within us and around us." Marc Chagall